What if you can capture a sense of place in one picture? An image that might takes liberties with exact GPS coordinates but nevertheless portrays its dynamic subject as a painter might approach a blank canvas — with fresh eyes that try to find nuances, highlights, hues in what is already an overly-familiar scene to render it totally new?

Here, we present six maps of a place — Greenwich Village — legendary for its formidable reputation as the Bohemia of New York City, an important landmark on the terrain of American culture in the early and mid-20th century. The maps — each from a different year and different artist of that era — contain pictures, energizing the canvas with the spirit and personalities of its time through the perceptions and insights of its creator. Hallmarked with lighthearted amusement, playful irreverence, rollicking humor, tongue-in-cheek observations or scholarly documentation, the range of artists steeped in their craft — from cartoonists to cartographers — revel in being amused observers, wry commentators, riotous participants or geographic archivists as they lend a musicality and rhythm that have us sensing the environs as it teemed with colorful residents, the alternative culture they propagated, and the artistic hubs where they gathered. When most of the country during this era underwent wintry tensions of Prohibition, the Great Depression, and Social Upheavals, Greenwich Village — in these creations of cartographic poetry — always seemed in pursuit of an eternal spring — of viewpoints, convictions, attitudes, and lifestyles that thrived on its fertile ground, whether one chose to gravitate toward it or stay further afield.

We welcome you back to that Bohemian Greenwich Village through the directory of pictorial maps offered for your leisure, meandering through what feels like a meadow in constant bloom. As you access each map on noted online repositories — enlarging its scale and narrowing your focus on streets, corners, and characters — scan for famed venues that gratefully still linger or sadly no longer exist … and imagine yourself taking in the ambiance — tasting, smelling, hearing beyond absorbing its sights or feeling its potency and impact across a city. Which famous writer, poet, musician, politician from that time might have seen these maps? Who had them hung on their walls or inserted into their books? Which maps were referenced during roundtable discussions at coffeeshops, where neighborhood residents saw themselves mirrored in the maps’ riotous bevy of characters? And if you had an opportunity to create a pictorial map of our own “place”, what might it likewise portray?

“Place”, after all, is not just about a geographic location; it is about the lives led through interactions on streets and corners, clubs and parks. And “place” is also a portal — to connections and memories held for long-time residents … and to new observations and experiences for the newcomer or visitor. While these historical maps of Greenwich Village may lack exact GPS coordinates or in-depth geographical references to a famous bohemian’s residential data, or to an iconic cafe’s networking statistics for its cultural demographic, they offer — individually and collectively — a compelling portal to a milestone era in New York City’s history. For they hold the enchantments and force of layered associations — artistic, cultural, political, social constellations — that anyone strolling the neighborhood today can still rediscover as distinctly immediate. 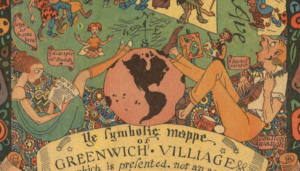 For an enlarged map view and full description notes:

Colorful pictorial map. Published in The World Magazine, 1922. Borders with illustrations of Adam and Eve on sides, snake on top and title cartouche on the lower margins. Filled with vignettes of peopled in various activities. Includes note: “Little colony of temperamental intellectuals has its byways and side streets, mystifying perhaps the everyday visitors but quite open and inviting to the artist, Coulton Waugh, who has sought to transcribe the passing Village life for historical records of the future.”

The Harry Ransom Center, University of Texas at Austin

This map, drawn by Robert Edwards, was published in Quill, a magazine popular with the Village community. The map shows the bookshop in its final year in business, 1925. Shay no longer ran the shop, as can be seen in the description of the shop at number 49 in the legend. Frank Shay is called “Parnassuswaggoner” because he had moved to Provincetown, Massachusetts, with his travelling bookshop, “Parnassus on Wheels.” Of particular note are the map’s designation of two distinct immigrant communities, “Erin” (Ireland) and “Italia,” concentrated in particular areas of the Village, and the presence of “Aristocrats” and other wealthy community members in the elegant blocks surrounding Washington Square. Immigrants and “Aristrocrats” alike are frequently absent from the Bohemians’ descriptions of their community, so Edwards’s decision to highlight them here is notable.

“A Hand-Drawn Map of Bohemian Greenwich Village, 1925” by Rebecca Onion

Chart of Greenwich Village For Navigators Who Will Travel on Water or Otherwise. Once the Ninth Ward and Ancient Home of the Celt, Now Simply Hobohemia or “The Coney Island of the Soul” 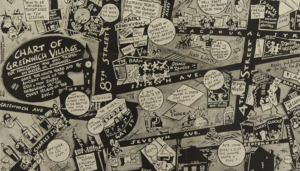 A unique contemporary visual framework of the Greenwich Village scene in 1933. It was drawn in the quirky cartooning style of the first half of the twentieth century by Frank Hanley, a regular cover artist for Judge Magazine and contributing illustrator to other humorous publications of the 1930”s. His combination of compressed geography and Art Deco design elements interspersed with bubbles of contemporary catchphrases, hooey symbolism, and boffo social and cultural references helps exaggerate the bustling neighborhood vibe.

A map of Greenwich Village showing some of its historical, artistic, literary, educational, and religious places of interest 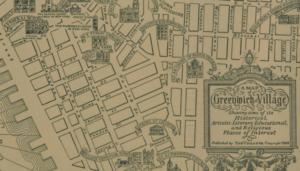 View an enlarged map and full description notes in this Map Collection:

This is a 1934 E. L. Harper pictorial map of Greenwich Village. The map depicts this New York City neighborhood from the North (Hudson) River to Lafayette Street and from East 14th Street to Canal Street. Highly detailed, each of the streets in the neighborhood is labeled, along with numerous locations illustrated in profile. Nearly two dozen different places of worship are depicted, including Grace Church, the Church of Our Lady of Popeii, and St. Bernard’s Church. New York University and the Washington Mews are also illustrated and labeled, along with Washington Square and Washington Arch. The original Whitney Museum of American Art is included as well as the New York Public Library and the entrance to the ‘Holland Vehicular Tunnel.’

“Greenwich Village in the 1930s and Today” by Sarah Eccles

A Map of Greenwich Village 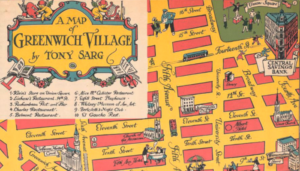 Sarg’s pictorial map of Greenwich Village, with illustrations of important places, including the Salmagundi Club, the Washington Square Arch and New York University. Jefferson Market prison, the Washington Square Bookshop, the Village Barn, Luchow’s, and Wanamaker’s department store are also shown. A key below the cartouche provides a guide to the locations of various restaurants, stores, bars, and the Whitney Museum of American Art at its original location.

In the margins, portraits of Mark Twain and Washington Irving, former Greenwich Village residents. People shown in various activities include artists painting, a woman shopping, and performers in Union Square.

Map of the Greenwich Village Section of New York City 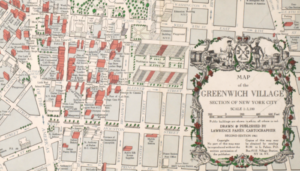 Large and detailed map of Greenwich Village intended to be of practical use to visitors, at a time when “the Village” was the center of Bohemian culture and the New York avant garde arts scene…The degree of detail makes this a fascinating historical document of the neighborhood at that particular point in time. The map extends from 14th Street in the north to Prince Street in the south, and from 7th Avenue to the west to Broadway in the east. Printed in white, green and red, the major buildings are drawn in aerial perspective and trees are indicated by small green lollipop shapes. Public buildings are shown in white, all others in red. The featured buildings include churches, stores, galleries, theaters, New York University campus buildings, monuments, fire stations, hospitals, schools and restaurants. Directions of one- and two-way streets are indicated.

We invite you to join us on our tours to explore Greenwich Village for even more of its vibrant serendipities. Complement your strolls by pairing John Strausbaugh’s masterful overview of “The Village: 400 Years of Beats and Bohemians, Radicals and Rogues, a History of Greenwich Village” with Judith Stonehill’s loving homage of curation for “Greenwich Village Stories: A Collection of Memories”.