A Hunt for a Neighborhood’s Heritage Treasures

Imagine a walk that introduces you to one of New York City’s oldest, largest, most historically rich and among the most highly picturesque and coveted neighborhoods. Located in lower Manhattan, this historic district of winding leafy lanes through a rich architectural palette now contains more than 2,000 buildings and stretches over 65 blocks. Along its irregular street grid — visible on the map as a remnant of its twisting 18th century pattern — we experience the neighborhood’s origins as a Lenape fishing village, discover its transformation into a Dutch tobacco plantation, trace its development into a sleepy British country village, sense its sanctuary for an epidemic-stricken population in the early years of a new nation, and understand its mooring for waves of free Africans and early immigrants, before exploding onto the mainstream consciousness as a bohemian centre of renown.

Greenwich Village lingers as one such treasured destination of culturally distinct identity, one for which travelers continue make the pilgrimage on a quest to relive its reverberations. It still teems with perspectives brought to life by its many artistic characters and colorful lives reintroduced, as we meander through the remaining coffee shops, jazz venues, book shops, butchers and pastry shops they frequented. For discerning individuals on the hunt for long-sought insights on the forces driving the explosive creative evolution, fiercely independent character, and fearlessly uncompromising soul of New York City, a walk through this neighborhood of births is not only an essential, but an indulgence. Be we long-time residents, first-time visitors or settling newcomers, we come away the hidden legends behind coffee shops and jazz clubs, forgotten stories buried within archives of record stores and the Beat Generation’s literature, and — in true NYC evolutionary fashion — we learn how Magnolia Bakery and Carrie Bradshaw’s Home have become the most iconic structures redefining the neighborhood’s prestige.

Here we present a few selected valuables packing a far-more abundant chest of heritage-treasures … all from which our inner-adventurer (or perpetual-child in constant quest of wonder) can deeply extract to a heart’s content. With so much more that compels, a scouting pursuit for heritage treasures can prove to be an ongoing source of fascination — be this on your own, or among family and friends! As attentions are engaged and curiosities aroused for a hunt, here are some leads to get you off to a good start. Let us know what you’ve discovered that we overlooked or missed, coaxing us all into countless revisits and walks for more …

Archaeological Finds/Places or Artifacts of Note

For those intrigued by sites long demolished or buried, holding remnants or memories of past lives

For those fascinated by a city’s evolving styles, reflecting cultural legacies over centuries

For those allured by the range of visual, literary, and performance arts

For those drawn to rituals in temples of worship, symbols in stone, traditions in communities

For those enthralled by overlooked skills of woodcarvers, glassmakers, bricklayers, masons, and more

For those lured into the design and engineering of public works 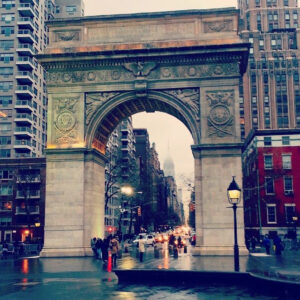 For those captivated by landmarks that define and signify milestones

For those entertained by celebrations of games, parades, holidays, sports, and all things festive

For those gripped by overlooked stories on building markers, sidewalk plaques, monuments

For those entranced by forgotten tales behind street names, official seals, neighborhood rituals

For those enchanted by the impact of waterways, minerals, stones, flora, fauna, animals, birds

We welcome you to join us for a food & history tour of Greenwich Village to dig deeper into the yet-unearthed of both its tangible and intangible assets. Its stories are further interwoven with narratives at nearby neighborhoods of Meatpacking District, SoHo, Chinatown and East Village (The East Village is just across Astor Place and it’s loaded with dives, grungy tattoo shops, and old-school record stores. Check out our guide to this popular neighborhood.” ) and Lower East Side, which we invite you to further explore.

Should wanderings inspire more, complement your strolls with a visit to record stores for the music of the various eras, coffee shops where they might have frequented, and some bookshops for these few selections introducing overviews of Greenwich Village and its legacies:

The Village: 400 Years of Beats and Bohemians, Radicals and Rogues, a History of Greenwich Village

The Municipal Archives, “Greenwich Village and the Square”