Dialogues with Gods of Beaux-Arts and Art Deco New York

The mission is to look skyward. Where they continue to reign over civilizations, if not Infinity. Crowning monumental buildings, dominating pedestals, carved onto soaring pediments and columns, their structural and sculptural forms loom far above mere humans. A reminder of a hierarchical relationship that stretches back into the eons of myth, legend, and faith.

These gods of Beaux-Art and Art Deco New York — classical figures from Greek and Roman mythology — are not ready to surrender their classical reign. Competing glass and steel towers aspire to be the new deities, challenging territories through their stratospheric manifestations. Had these artistic and architectural forms spanning cultural epochs and distinct styles exchanged views, it may be difficult to parse the nuances of their conversation. Dialogue? Debate? Diatribe? We may need to listen more.

In that pursuit, we seek out the Ancient gods incarnated into their urban dwellings. We target on their domains throughout the cityscape, mapping where they have long held ground. Should we wish to reacquaint ourselves with some of these gods, a reintroduction to them — in their Greek | Roman names — may inspire both outer wanderings and inner odysseys, compelling a decoding of those messages they sought to convey.

Goddess of the hunt and moon, patroness of the countryside, guardian of the forest

Goddess of wisdom, trade, the arts, and war strategy 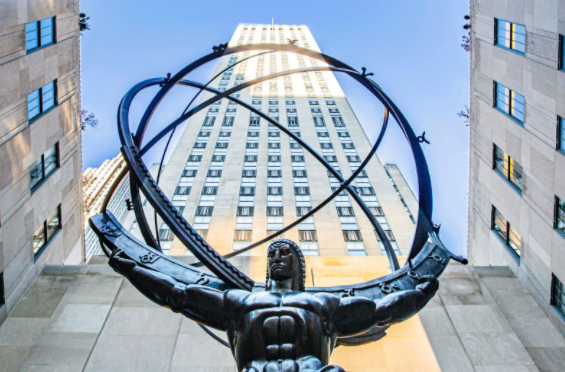 God of crossroads, of travel, of messengers

God of the blacksmiths, of metallurgy, of craftsmen, and of volcanoes

Priestess to the goddess Athena, cursed to be a snake-haired gorgon

Symbolism(s): Protection, A Threat against Threats

God of the sea, earthquakes, horses, realms of heaven, the earthly world, the underworld.

Winged goddess of victory–victory both in war and in peaceful competition.

Titan God of fire and creation of mortals

Titan goddess of law and order, traditional rules of conduct

God of the sky, thunder and lightning, ruler, protector, and father of all gods and humans.

In most instances, these gods appear solitarily, guarding their respective spheres in the cityscape. But on at least one occasion — akin to an alignment of stars in a constellation — a triumvirate appears, securing their hold for over a century aloft a landmark integral to a city’s movements and energies.

This trio of gods — in their Greek appellations —include Mercury, Minerva and Vulcan. Their sculptural group representation — memorialized as “Glory of Commerce” — is a work alternatively titled, “Progress with Mental and Physical Force or Transportation.” Designed by the French sculptor Jules-Felix Coutan and prominently positioned on the south facade of Grand Central Terminal, it is of the same Bedford limestone façade as the Terminal, measures about 48 feet (15 m) tall, 66 feet (20 m) wide, and weighs about 1,500 short tons (1,400 t). Considered the largest sculptural ensemble in the world on its 1914 unveiling, Zeus would have been proud for another Olympus on Earth.

The choice of these three gods for so prominent a landmark situated in a core hub of the city is not without careful reason or calculating motivation. At the official opening of Grand Central Terminal on February 2, 1913, architect Whitney Warren is reported by the New York Times to have described the sculptural endeavors’ conceptual intent:

“an attempt to offer a tribute to the glory of commerce … as typified by Mercury, supported by moral and mental energy – Hercules and Minerva. All to attest that this great enterprise has grown and exists, not merely from the wealth expended, nor by the revenue derived, but by the brain and brawn constantly concentrated upon its development for nearly a century.”

It is a statement that — more than a century later — would bring us pause.

Had we had an opportunity to interview the other gods of the city on Mercury’s central role in “Glory of Commerce”, they might have contemplated its ironies, hinting at the hidden life of this young Messenger of the Gods as they all recall his penchant for cunning, mischief and gaining status through theft on Olympus. For if ever there was Master God of the “Covered Tracks” — strategic in his logistics, wily in his movements, yet charming enough in his demeanor to avoid suspicion — we need search no further than Mercury. And, indeed, we might observe with either wry amusement or mock horror: that it is he who should have the central role in the triumvirate atop a historic landmark in a city of noble and questionable motives. Where travelers, trades, treaties converge; and where wheelings-and-dealings of all kinds would make him feel right at home.

Architect Warren’s ideals notwithstanding, sculptor Coutan’s design must have been cautioned by knowledge of Mercury’s pranks enough to ensure his statue does not stand alone, unguarded. For behind Mercury is Aetos Dios (Eagle of Zeus), a symbol of intelligence, speed, and dominion that can easily knock him off his precarious position, should he take his responsibilities for granted. And on either side of him are two other gods — no doubt assigned to curb his penchant for trouble, power play, and bragging rights: the Goddess of Wisdom Minerva and the God of Fire Vulcan (mistakenly declared as the God of Strength Hercules). Admonishing that the Wise have the power to hold down the darker sides of their Fire; and the Fiery have the power to wield their Wisdom for good.

In dialogues with the gods and their symbolic representations throughout the city — above the noise of dialogue, debate, or diatribe — this may turn out to reveal their ultimate message after all.

We look forward to opening our Grand Central Terminal Indoor Food Tour again soon. Until then, some of these amazing sculptures can be found nearby after you finish our Times Square and Central Park tours, and also at the beginning of our new Full Day Brooklyn Walking Tour.