The Art and Mastery of the Lion Dance

An Ancient Tradition of Endurance and Commitment

It is the most magnetic attraction at any Chinese celebration heralding new beginnings. Be this festival, wedding, business venture, or personal life chapter. And it arrives with a head of a creature like no other, followed by a body and tail moving to the rhythmically percussive sounds of drums, gongs and cymbals. Sounds to ward off evil spirits.

That creature is the Lion — symbol of ferocity, protection, courage. And its famous Dance is just as ferocious and explosive, striking awe in the hearts of its audience, who exuberantly cheer its entry for the much-sought good fortune and happiness it brings. And as it moves — lunging, jumping, catapulting, reaching — in a choreographic narrative expressing its own form of dominance, its dance seals its regal place in the hierarchy of Chinatown’s must-see’s during its Spring Festival or Lunar New Year.

But behind every powerful Lion is a head-tail partnership of two dancers, seamlessly coordinating their weights, strength and stamina to achieve movements honed through years of Kung Fu and martial arts training that serve as its foundation. If we thought we could crash-course our way into performing a Lion Dance, we might first have to humbly assess one’s physical prowess, emotional mettle, and mental resilience to train in ways beyond our capacities. Have we developed the arm strength to carry a massive head of measurable weight and symbolic stature, with required puppetry-like manipulations to animate its eyes, ears and mouth? Do we have a flexible back to be in a continually hunched position for its tail, with an intuition, tempo and spontaneity to anticipate our head-partner’s next series of moves? Have we mastered the partnership and teamwork involved — our artistic and technical skills cloaked beneath our head-tail costume — to keep audiences enthralled and make a real lion proud?

Tracing its beginnings back to the Tang Dynasty (618-907 AD), the dance is said to originate as a ceremonial practice and court festivity, eventually adopted for martial arts practitioners to competitively raise skill levels among their schools. The dance has also been used for covert missions involving attempts at the overthrow of the Qing Dynasty (1644-1912), with revolutionaries passing messages hidden in lettuce for lion dancers cloaked under the guise of celebration.

Over centuries and generations, the Lion Dance has evolved in costume style, choreography, artistry, athleticism and narrative. But this ancient custom prevails as a rich cultural art delighting and enthralling a world inspired into further learning its many facets. The Lion Dance costume has likewise gained its followers, as they shop for this as a collector’s item, family heirloom, museum artifact, design muse, or performance attire.

If, at first, we may not not easily recognize the dancing creature as a lion, we would not be alone in wondering what went into the design of its bulbous, larger-than-real head and its dragon-like body and tail.

Weighing anywhere between 15-30 lbs, the head is made of bamboo, wires, lights, and, in some cases, beer or soda cans. Keen observers would note its glassy blinking eyes, wiggling ears, teasing lashes, wide furry flapping mouth of wool, lips curved in a restrained grin or straightened in pursed fashion, a curious horn, mirrors on its forehead, phoenix feathers around its neck, and — most distinct of all — its wild assortment of colors, streamed over the rest of its body and tail. If we all guessed the Lion to be a playful concoction of different mythological beings, we could be close to unveiling the true story behind its hybrid appearance.

According to legend, the story of the Lion’s “look” begins with an Emperor’s nightmare. Had we been called to his court to counsel and calm him, our meeting might have been recorded as follows:

Emperor: “I had a terrible nightmare. I was being attacked by demons. But I was suddenly saved from my attackers by an animal — a very powerful one. But it is mysterious: I have never seen an animal like that before.”

Counselor: “Imperial Majesty, it sounds like you are describing an animal from the West. It is called a lion. But we, too, have never seen one here in our lands.”

Emperor: “You have a task. Try to imagine what this Lion from the West might look like …”

Following the Imperial Court meeting, the counselors may have been forgiven for imagining a creature mashed-up beyond recognition. But where they missed in form, they made up in symbolism. The horn of a unicorn for unconquerable will. Mirrors to ward-off approaching evil spirits repelled by seeing their own reflection. Phoenix feathers for regeneration and immortality. Dragon scales for protection. Thus was born the Chinese Lion.

The Training of a Professional Lion Dancer

“To make my parents and ancestors proud.” It is a heartfelt wish almost commonly shared among those aspiring to master the Lion Dance. In just a few words is the sparked spirit of a treasured tradition passed on from one generation to another. But what is required of preserving legacies can be arduous. 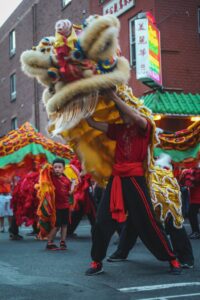 Should we wish to observe a class-in-training, we will immediately recognize the bootcamp that it is for its demanding Kung Fu challenges and martial arts stunts. We may even overhear a conversation between Lion Dance partners, with one aiming for the Head’s glory to another avoiding the Tail’s sweat and tears. We watch and, if allowed, give it a try. And, until that moment, we will never know how much partners really weigh. Or how to shift and align our own weights with theirs for ease, tension and balance.

But we tenaciously press on, wondering if we could survive. A seemingly infinite number of box jumps that push every muscle. Overhead weights held in positions that strain arms. Deep horse stances that pain calves. Partners holding each other up for minutes that feel like days. Varying footwork and routines that summon dexterity and stability. Who thought one deceivingly simple move from a Lion Dance could involve so much endurance, drawing out truths in — and of — ourselves?

While some of us are daunted by the challenge of training to perform a Lion Dance, we welcome you to join us as we celebrate New Year activities (Feb 1-11) and it’s Chinatown Parade (Feb 12). The sumptuous flavors of a rich culinary palette await; as do the sounds of greetings and exchanges that bestow blessings and prosperity. Our Chinatown Food Tour will be back up and running soon, but you are just a short walk to this incredible neighborhood after you finish our Historic Downtown walking tour.